The store will not work correctly in the case when cookies are disabled.
Currency GBP
JD Photo Data.

A greyscale image is one where each pixel in the image represents a different rate of intensity. These can be represented in many ways, but a general consensus is to use a range where 0% - totally clear and 100% is totally black, with various ranges in-between. This does not cover all aspects, because with printing we also use the term 256 level greyscale, meaning 256 individual steps between white (clear) and black (opaque).

Our process is a binary one, whereby we can only image light on, light off. It is true that we can change the intensity of the light, but this can only be done on a whole mask basis – not pixel by pixel, so we cannot create a normal greyscale image as defined by "printers" or "photography". However, we DO have a solution that works in the vast majority of cases, and that is pixelation or dithering.

There are 2 different types of customer who want greyscale masks. One of these is optical - where the customer wants a section of the photomask to appear grey to an eye or camera / lens / video. This is the part that we can certainly help with, because we use a differing - or halftone -  process and the trick is to make the pixel that creates the "grey" smaller than the lens can resolve (normally 50% smaller) - so the lens is tricked into thinking it is looking at a grey tone. This generally works very well.

The second type of customer needs a transmission grey - where different amount of light is transmitted through the photomask to expose a photoresist underneath, usually building up 3D exposures. This method is more difficult to overcome with dithering process, because it depends upon the type and thickness of resist used. It can partially work, but generally needs lots of experimentation with resist speeds, resist thickness and pixel size by the customer.

Dithering is a process of representing grey levels to the human eye by placing certain sized dots or patterns close to each other, varying them in size and shape to represent a grey tone. This method has been used for many years in the printing and newspaper industry; however we have the ability to take this graphics pattern to a whole new level due to the tiny pixel sizes that we can generate.

We take an existing greyscale or colour image and run it through some graphics software (such as Corel Draw or Adobe Illustrator) to apply a dithering process, sometimes called a halftone process. The end result is a binary mask that appears grey to a lens or video due it being unable to resolve the pixels individually.  If the lens/video in question has the ability to resolve very small features, and we have to use very small pixels, then one problem with the dithered process is the enormous database sizes that this can generate – quite easily into the gigabyte range. Because of this, very high resolutions over large areas may not be possible.

Below shows an aerial photograph of a building, parking and grounds which has been converted by a dithering process into a raster image, using a fairly large pixel of 12um. This image was then projected in a normal way onto a soda lime glass photomask. It is impossible for the human eye to see any pixilation of any sort in the picture. 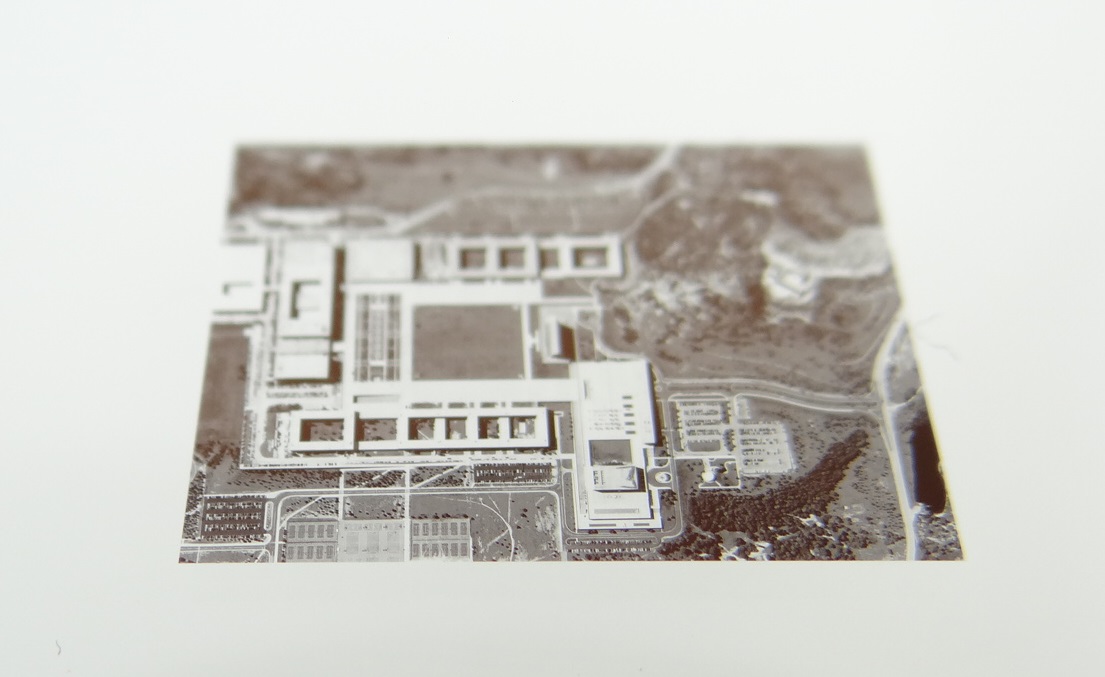 When writing a polyester film mask there are a few things that we can do to compensate in our binary process, giving us a limited greyscale image. We set the image intensity at a certain level, then start the imaging process and run parts of the design... then change the light intensity and then run the mask image process again. Using this method, with multiple passes, we can obtain one photomask film with various greyness levels on it – for example, part of the film can be 25%, part 50%, part 75% and the remainder 100%. In theory, we can run these passes as many times as we wish to build up even more grey levels, but in practise each pass takes quite some time to run and time constraints means we are often limited to just a handful of levels.

If using this method, we have to ensure that no items of one grey level are within 0.25mm of other areas with different grey levels – this is due to light scatter which will affect the adjacent areas, increasing their exposures and therefore changing the grey levels of previously exposed areas.